The day we set out to test Remington's 9mm 124 GR Ultimate Defense, Full-Size Handgun Golden Saber BJHP ammo, it was a crisp Midwest 20-degree day with fresh snow. But it didn't hinder any of our excitement. After all, it's always fun shooting guns and putting gear to the test. Remmington was kind enough to send us some of the Golden Saber rounds for testing in ballistic gel, and we were happy to oblige. We came up with the most scientific test we could, containing three testing phases. The first would be simply firing into the ballistic gel to see if the round provided good expansion as it's supposed to. The second test would be through a wooden intermediate barrier, and the third test would be through a car door. All the trials take place one right after the other so that the gel can remain as close to the same temperature as possible.

The ammo says it's full-size handgun defense ammunition, not that it wouldn't work in a micro gun, but the results are probably tested from a full-size pistol's barrel length. To provide the ammo with the fairest test possible, we decided to use the new SA-35 from Springfield Armory, which has a 4.7" barrel. This definitely puts it in the full-size handgun department. The gelatin block itself is the FBI standard mold size of 16" x6" x6" and we made it ourselves. Which is relatively easy to do. 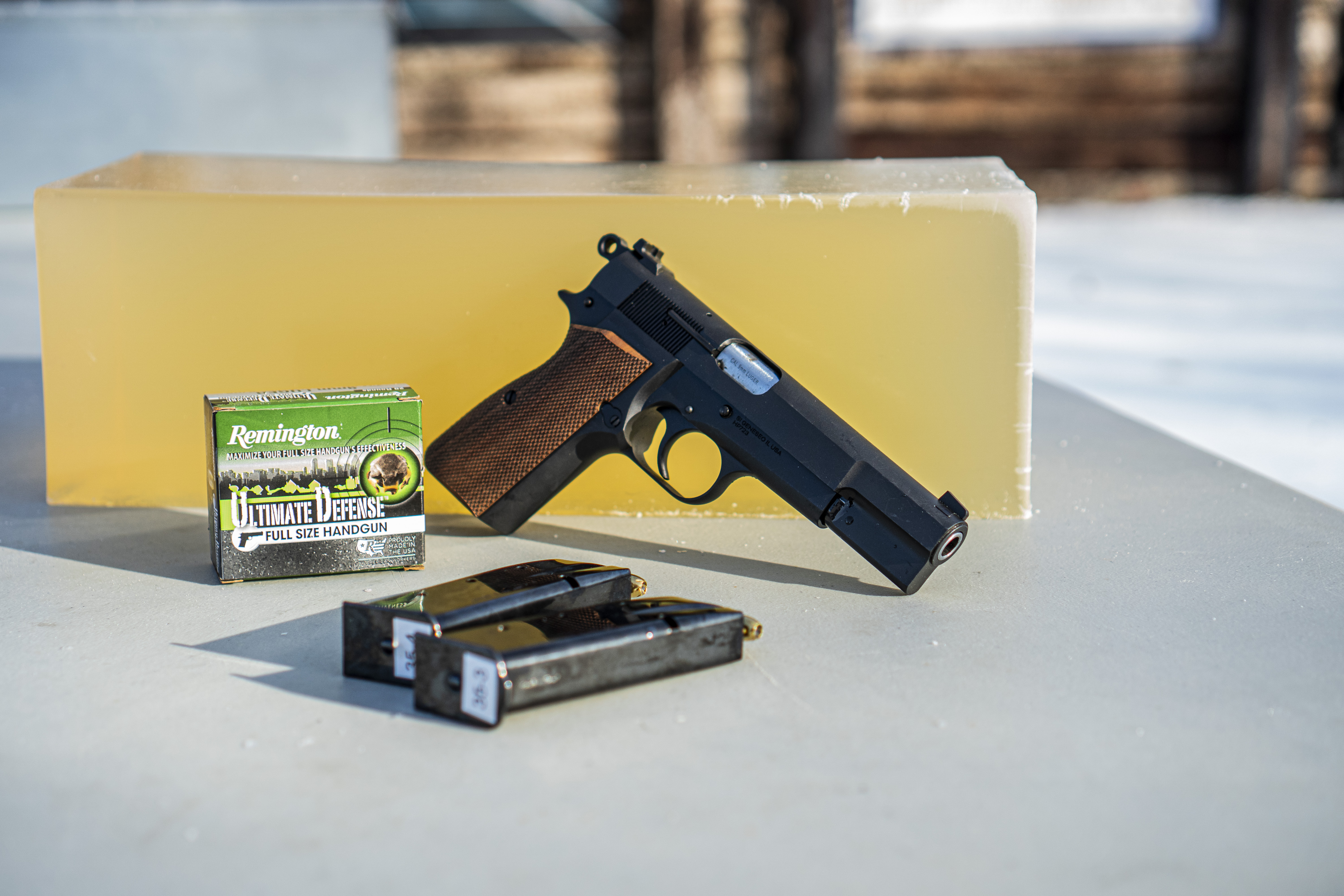 We set up a table at the range for the first test, placed the ballistic gel on it, and took aim with the SA-35. The first round did very well; penetration was 13.5 inches into the block. The bullet expanded early on, making for a beautiful spiral pattern as it tore into the gelatin for 13.5 inches. The projectile grew into a fantastic flour shape as it spun that would be sure to provide devastating terminal results on a threat. So far, in the most straightforward phase of the test, the 124 Gr Golden Saber BJHP was performing with flying colors. But this first test didn't put it to the test. 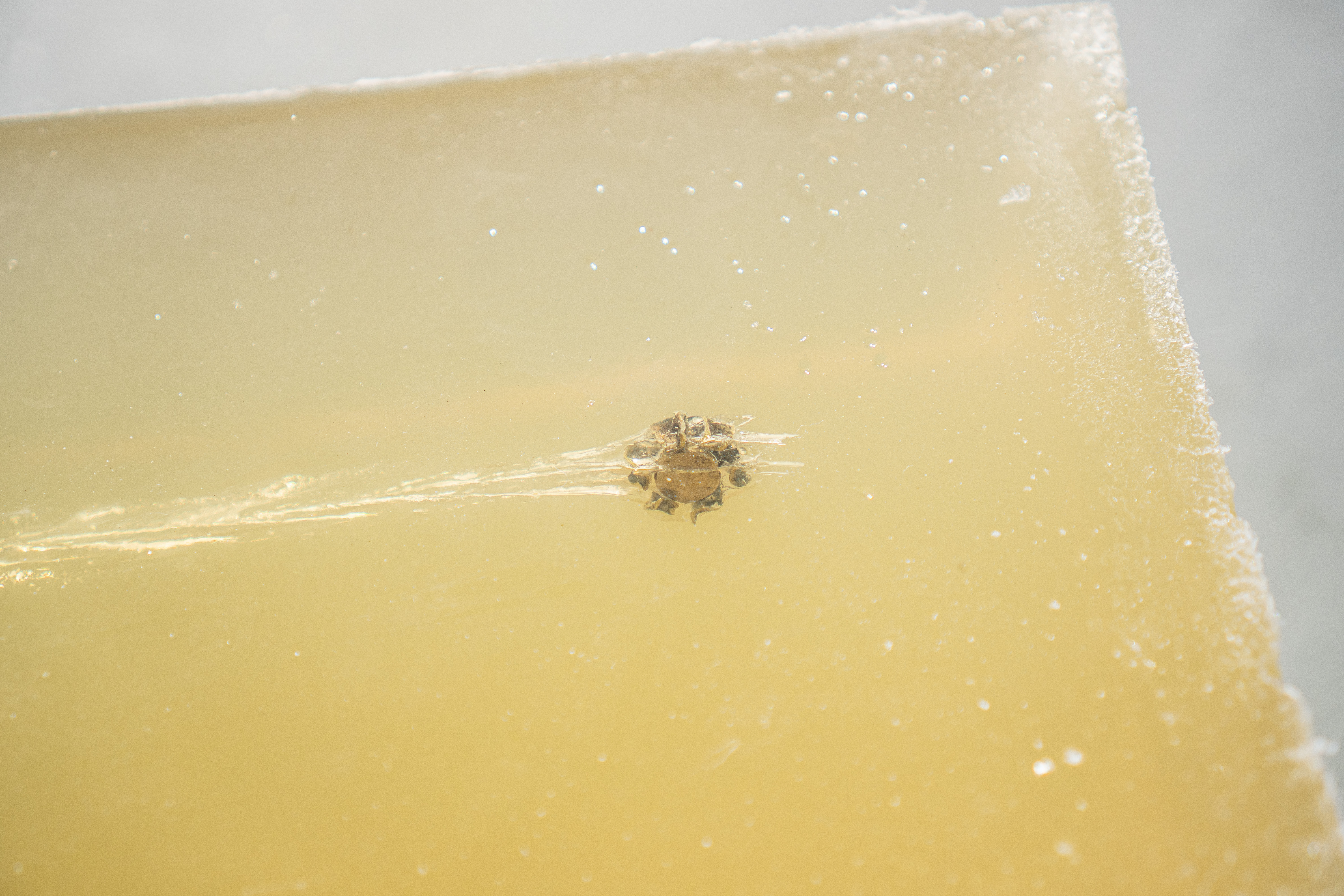 For our second test, we wanted to start testing it out against intermediate barriers. The second test consisted of shooting through a 2" by 6" board the same thickness as an interior wall stud but the same width as our gelatin block. The board was placed around 5 inches away from the gelatin. Space between the barrier and the target is essential. That way, we can track if the bullet would continue to fly straight after passing through. A 9mm round such as this should have no problem penetrating the wood itself. If it didn't pass through the wood, it would be considered a complete failure. The tricky part is can the bullet do it with enough force to fly straight after it clears. We set up our test and fired the round. The shot cleared the wood with no problem and flew straight into the gel. The round didn't expand because the wood particles clogged up the hollow point, creating more of a solid FMJ round. Hollowpoint rounds plugging up like that is to be expected and not out of the ordinary. The round penetrated 13.5 inches again into the block, literally even with the first round. The bullet carried tons of wood spall into the gell, creating a problematic wound channel to clean. It was clear the Golden Saber round performed very well again. 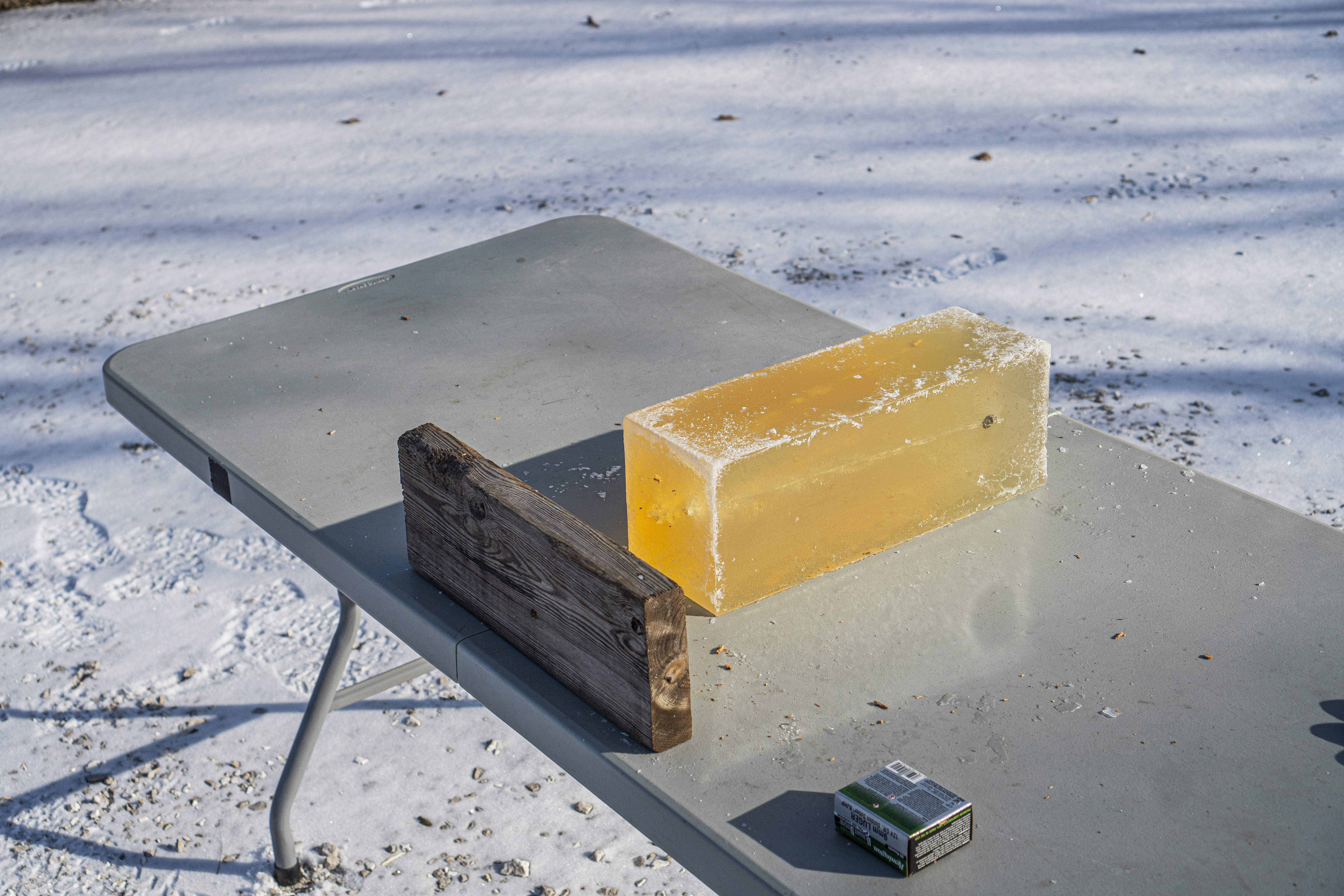 Now it was time for our third and final test. We placed the gelatin block on the inside of a Toyota Prius between the driver and passenger seat. Our plan was to shoot through the car door crossing some 30 inches on the other side, and into the ballistic gelatin. This would be a great test since the car door will be a multi-layer barrier with metal, plastic, and whatever else is inside Prius driver side doors. Then the bullet would have to fly another 30 inches or so in a straight enough path to hit the gelatin.

The first three shots of the round were stopped entirely by the Prius door. This is not really that unusual, so we encourage you not to let this be something that causes you to think down of this round or 9mm. Car doors have all sorts of things inside of them, and our guess is that there was an interior frame with extra parts, and our first three shots were high enough to hit that. In the 4th round, we aimed slightly lower to aim under whatever was inside the car we were shooting. The 4th round traveled through the door traversing the open space and hitting the gelatin. The hollowpoint was undoubtedly plugged as the entire bullet traveled through the length of the gel. So the round had more than enough juice to penetrate a car door, cross 30 inches still flying straight, and then pass through all 16 inches of gel. 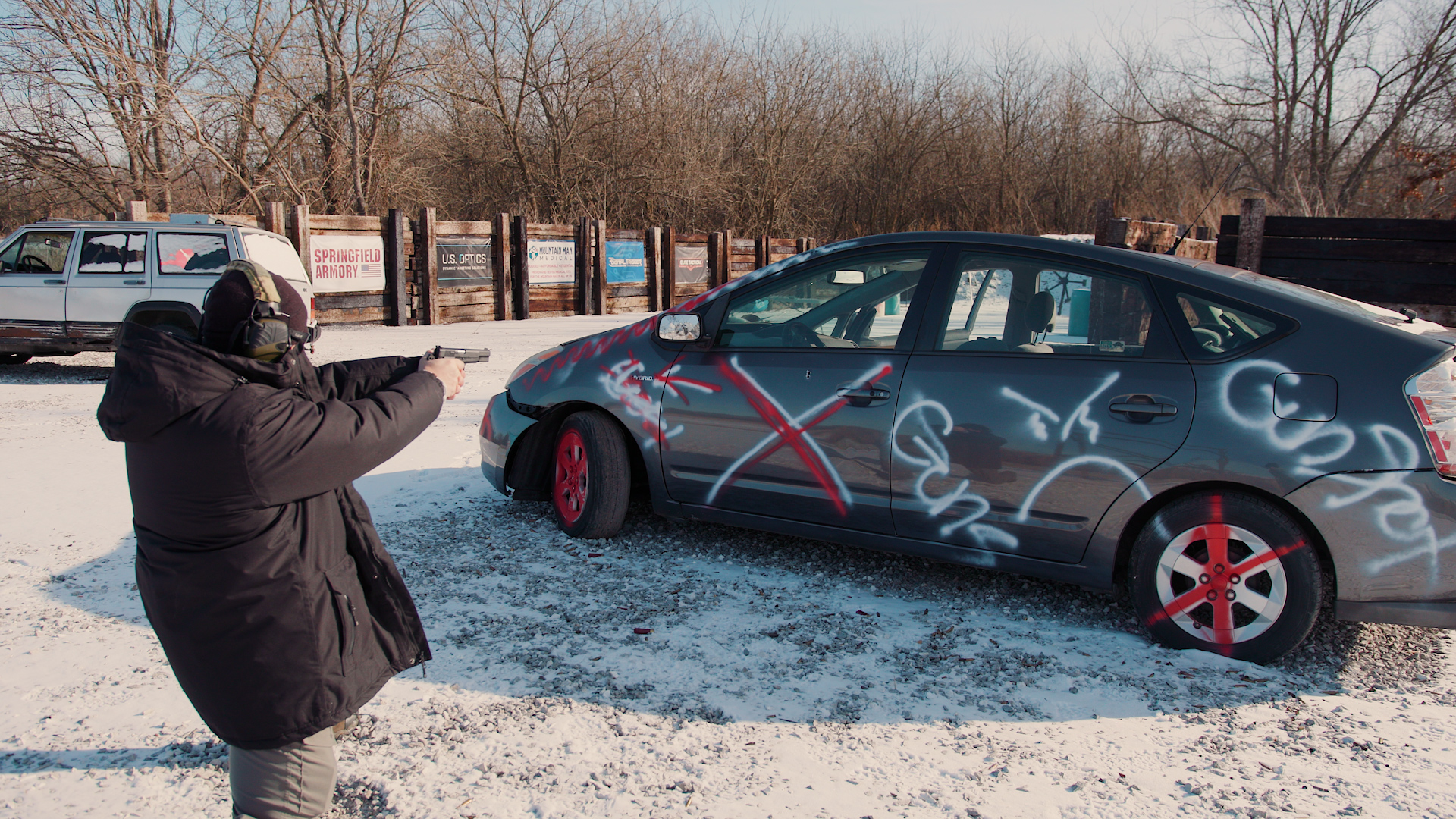 Out of all 3 of our tests, the Remington 124 GR Golden Saber BJHP succeeded. The ammo proved to be very accurate and constructed well enough to expand well, and when confronted with intermediate barriers, it would still drive through with enough sheer force to reach vitals on a threat. The tests were meant to replicate something similar to a danger hiding behind a wall or car door while firing. Again lab tests will probably provide different results, but we decided to test it out in the real world with random variables. We were delighted with the performance of this ammunition, and I think it is more than capable of using for self-defense ammunition. 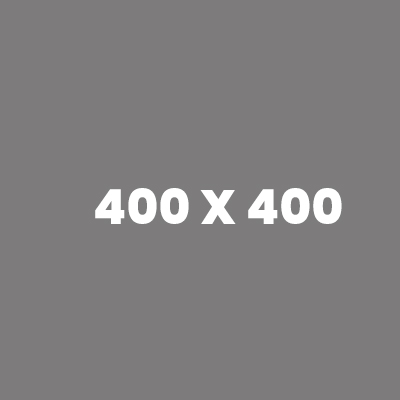 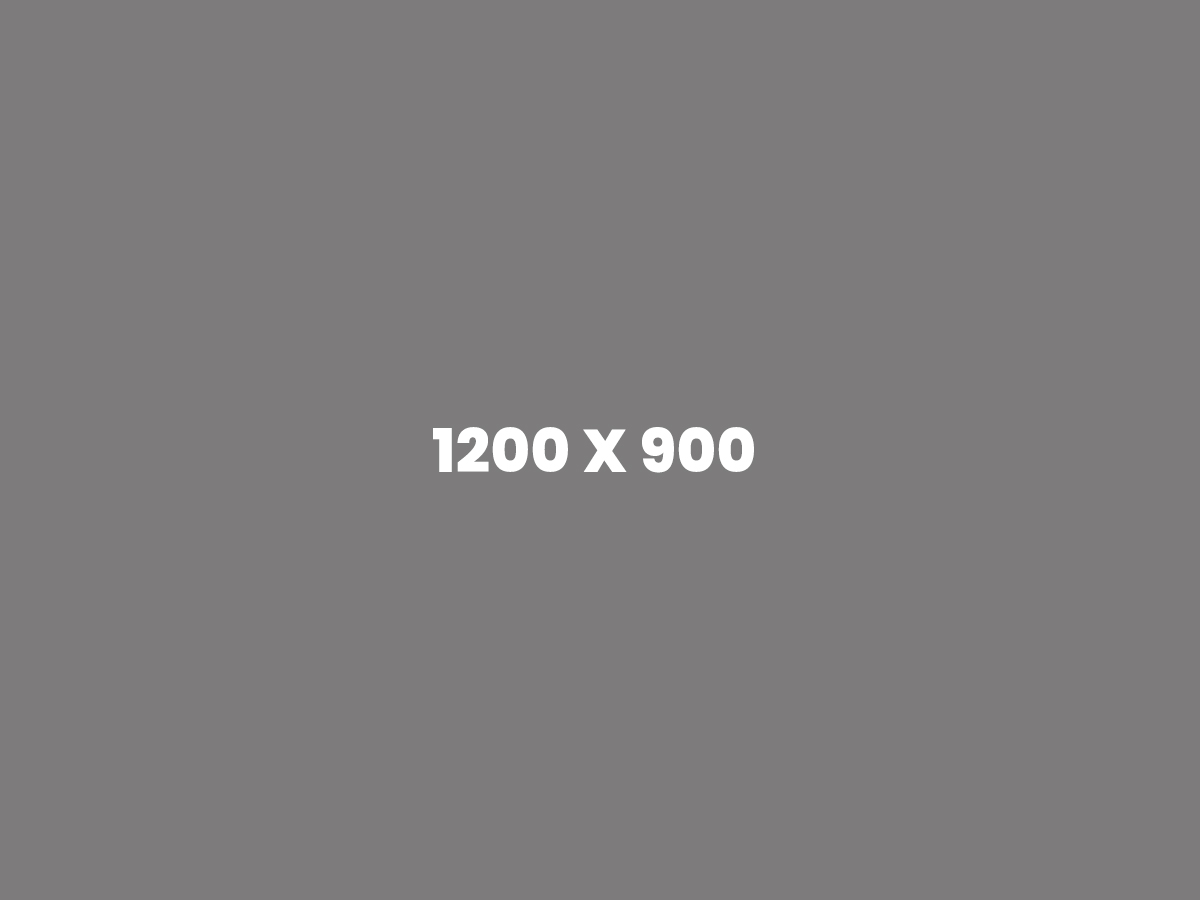 I'm the Creative Director at GunSpot. My main job is to create content that you can read or watch on The GunSpot Academy. I'm a video guy first and foremost but now, as you can see, I guess I'm an author too. Only out of necessity though!

Sign up for free and be the first to get notified about new posts.